The revised Laws of Fiji were announced at the April sitting of Parliament in the nation's capital of Suva – thanks to the help of LexisNexis Rule of Law program.

LexisNexis has been working closely with the Fijian Attorney General's Office for to prepare and publish the consolidated laws, which were last revised over three decades ago in 1985.

Anupama Bhattacharya, Executive Director of Asia Pacific Editorial Operations LexisNexis, visited Fiji to take part in a press conference to announce the details of the upcoming launch, and was joined by Fiji's Attorney General, Aiyaz Sayed-Khaiyum. 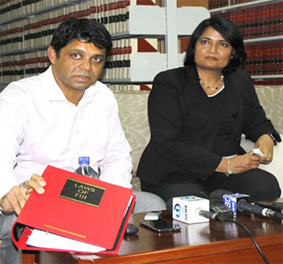 Caption: Attorney-General Aiyaz Sayed-Khaiyum with LexisNexis Asia Pacific's Executive Director Editorial Operations Anupama Bhattacharya at a press conference in Suva  to announce the details of the consolidation. Photo: Office of the Attorney-General.

"LexisNexis is honoured to partner with the Fijian Government in our drive to support the Rule of Law and make access to law easier for everyone. To this end, we are helping to consolidate 30 years of Fiji legislation," said Anupama.

Amendments were made to the Revised Edition of Laws Act 1971 in the February sitting of Parliament in preparation for the upcoming launch.

"The consolidation is very important because it does contribute in a practical and tangible sense to helping build the rule of law. Many people in Fiji mention the rule of law without understanding what it means," said Mr Sayed-Khaiyum.

The laws will soon be available in a three ring binder folder, which will allow for easy insertion of any future amendments. Previously, they were printed as books in several volumes.

The consolidated laws will also be available to the public through a dedicated website.