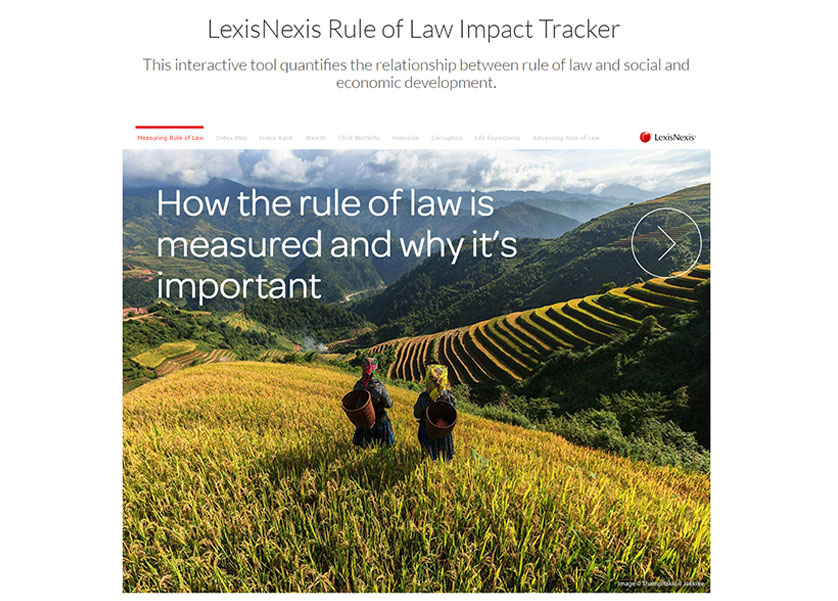 LexisNexis invites you to explore the LexisNexis Rule of Law Impact Tracker, freely available online. The Rule of Law Impact Tracker is an interactive tool that quantifies the relationships between the rule of law and economic and social indicators. It brings together data from the World Justice Project, the World Bank and Transparency International to power an interactive info-graphic. Countries are scored against 44 indicators across eight categories, based on interviews with 100,000 households and 2,400 experts around the globe. Using this data, countries are given an index that gives an indication as to their performance in the rule of law. The Tracker allows users to explore not only why the rule of law is vitally important to sustainable global development but also what's truly possible in the world if we work together to affect change.

The easy to use tool includes an index map and a rankings chart that give an overall picture of the state of the rule of law across the world. Users of the Tracker can explore the correlation between the rule of law and five key indicators: GDP per capita, child mortality rates, homicide rates, perceived public sector corruption and life expectancy. The resulting charts can be used as an investigative tool when considering conducting business in a foreign jurisdiction. Importantly, it can be used by business and organisations to target their rule of law projects and outreaches. The tool also provides an insight into what is possible by allowing users to track percentage increases in the rule of law against the benefits this will have on GDP per capita, homicides, child mortality rates and average life expectancy. For example, you will see that a 10% increase in rule of law could increase life expectancy by 2.3 years and decrease child mortality rates by 7.9 per 1000.

The Rule of Law Impact Tracker has been featured on the Huff Post site and is available at http://www.lexisnexis.com/en-us/rule-of-law/measuring-the-rule-of-law.page