You may have thought that a country with the dark history of being founded as a penal colony, and whose convict heritage is now a badge of honour for many Australians, would have a more compassionate perspective on crime and punishment.

But it seems Australia, egged on by law and order politicians and strident sections of the media, has shaken off its brief flirtation with prevention and rehabilitation to embrace a punitive tough on crime approach that has filled our prisons to bursting point, and is costing $2.6 billion a year.

To the uninitiated, shock jocks, and law and order politicians the fact that since the turn of the century crime rates have steadily fallen across most categories is vindication of this approach.

However, the downward trend goes far beyond what would be expected by locking up more Australians than ever before.

The legal and human rights community has become increasingly alarmed at the sheer cost  - both economic and human – of the situation, as well as the damage being done to the rule of law and the erosion of faith in the criminal justice system.

And on the 25th anniversary of the handing down of the report of the Royal Commission into Aboriginal Deaths in Custody, the running sore that is the number of Indigenous Australians behind bars is of particular concern.

According to the Australian Bureau of Statistics, the number of prisoners in adult corrective services custody at June 30, 2015  increased by 7 per cent on the previous year to a record 36,134. The national imprisonment rate was 196 prisoners per 100,000 adult population. 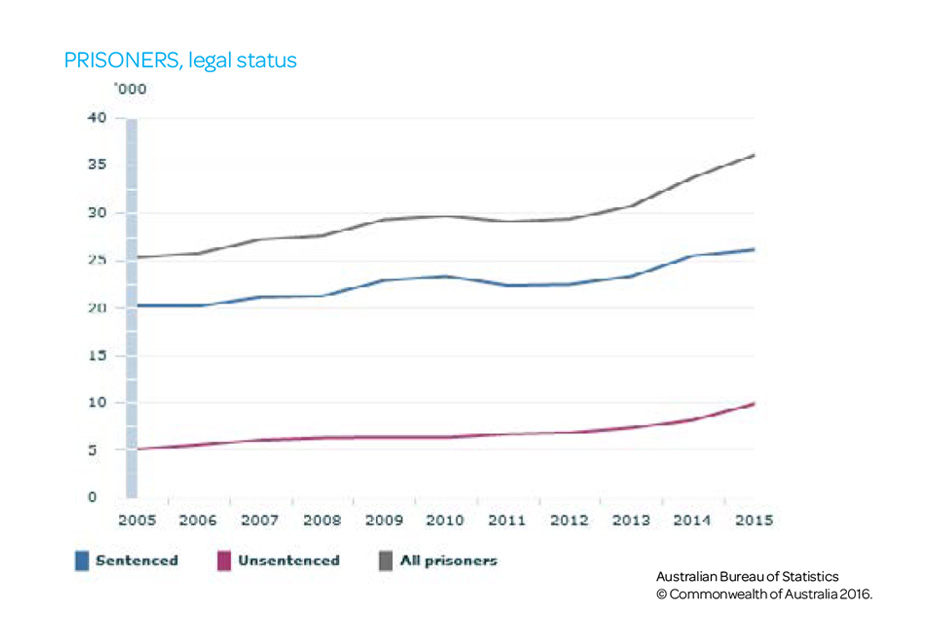 Aboriginal and Torres Strait Islander persons accounted for 27 per cent of these, despite being only 3 per cent of the population. In 1991 when the Deaths in Custody report was handed down Indigenous people were seven times more likely than non-Indigenous to be imprisoned, 25 years later that figure is now 13 times.

There was also a surge in the number of unsentenced prisoners (on remand awaiting trial or sentence), who now make up more than a quarter of the total Australian prisoner population - the highest proportion since 2005.

Yet Australia is hardly in the middle of a crime wave with the latest ABS crime figures showing robbery, homicide  and motor vehicle theft  across the nation at five-year lows (assault and sexual assault against women being the exception), confirming a long-term trend from about 2000 attributed to rising incomes, greater employment and the demise of the heroin trade. 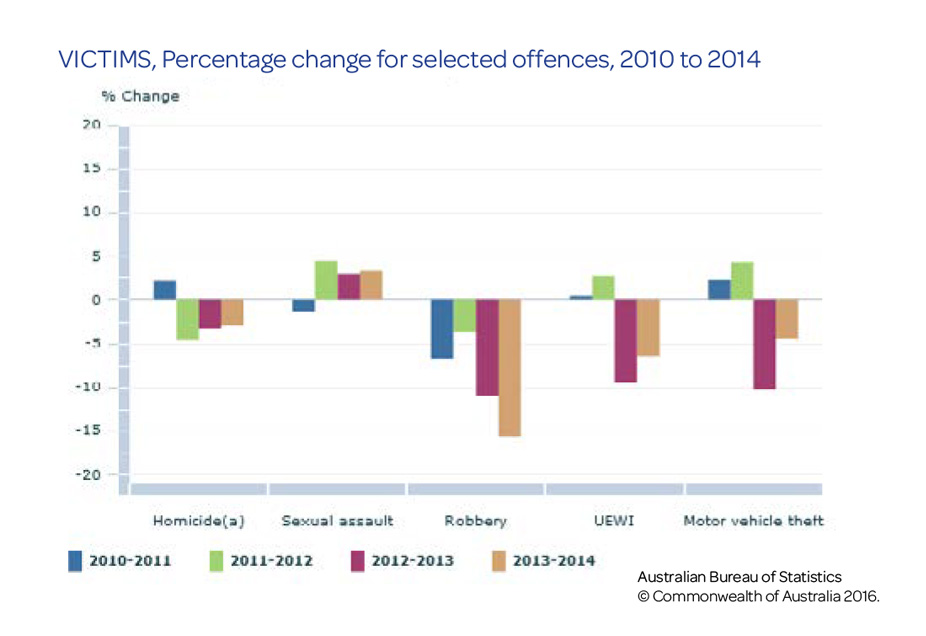 New South Wales' top crime statistician Don Weatherburn told the Applied Research in Crime and Justice Conference in Brisbane earlier in the year that research had shown a 10 per cent increase in imprisonment only delivers a 1-2 per cent fall in crime, which doesn't account for the 40 to 70 per cent falls, depending on the offence, recorded over the past 15 years.

"You'd think this dramatic fall in crime would bring with it a dramatic fall in imprisonment rates and a dramatic turnaround in public attitudes towards offenders, but you'd be wrong," Dr Weatherburn, the director of the Bureau of Crime Statistics and Research, told the Conference.

"Having pushed the law and order merry-go-round as hard as they could for more than 15 years, politicians found to their surprise that it was hard to get off. So the tougher laws kept coming."

This proliferation of law and order politics, with a focus on mandatory sentencing, longer jail terms, and tighter bail and parole conditions, combined with fewer sentencing options, court delays and the pursuit of minor offences, have sent imprisonment rates soaring, higher than that of the UK and Canada.

The justice system and those who  administer it have been under siege from media campaigns against "soft'' laws and sentences and those more than willing to make political capital out of sowing what Dr Weatherburn called "fear and loathing'' in the community.

Dr Weatherburn called for an overhaul of the state's approach, including  abolishing suspended sentences, which he called "speed humps on the way to prison''; not locking up minor assault offenders, more discretion for courts in sentencing and parole, and changing the approach to community corrections orders by increasing supervision and making the penalties for breaches lower.

He urged our leaders to "tone down the political rhetoric" but the stock response is that governments will do what is necessary to keep the community safe.

However politics is colliding with fiscal reality.

Dr Weatherburn told the conference that within three years  Australia would have more than 43,000 prisoners, costing $3.5 billion a year if the trend continued.

For Ben Schokman, Director of Advocacy at the Human Rights Law Centre in Melbourne, the prison system is not only  "stupidly expensive'' but failing.

"[It] costs on average about $120,000 a year to keep someone in prison and you can double that for youth detention,'' he says.

"If you look at recidivism rates or repeat conviction rates once people are released it tells you that the prison system is one which is failing."

He says a much more effective and more economically efficient way to reduce crime and prison rates, and promote better community safety, is to invest money in stopping people coming into contact with the justice system in the first place.

"According to the Australian Bureau of Statistics, the number of prisoners in adult corrective services custody at June 30, 2015  increased by 7 per cent on the previous year to a record 36,134."

Ironically it was the conservative US states of Texas and Kansas, with  ''lock 'em up and throw away the key'' policies, which pioneered the concept of justice reinvestment as an alternative to prison.

Mr Schokman says corrections' spending was literally sinking their state budgets so they looked at ways to divert non-violent offenders from the prison system and the results have been quite remarkable.

He says Texas saved about $US1.5 billion in a five-year period "purely by rethinking the types of crimes they were locking people up for and investing money into those particular communities where they knew most of the criminal offending was coming from''.

Offenders didn't get off scot-free but were given community-based work to do.

In Australia there are several  justice reinvestment trials being conducted, including Bourke in NSW's north-west where there is a large Indigenous population and statistics showed that "a very large number of people were ending up in prison for very low-level offences such as unpaid fines and  driving offences''.

"So they started designing localised tailored solutions to stop people going to prison for those kinds of offences,'' Mr Schokman says.

These are focusing on employment and keeping young people in school as preventative measures, as well as early intervention and diversionary and community-based programs that strengthen ties in that community.

"A community-based order puts them on some form of community  work where they are effectively being punished on one level but at the same time they're also doing things that are productive for that community, they're staying in that community and not being exposed to prison .''

He says despite the rhetoric state governments are now becoming  increasingly interested in what alternatives exist.

"Victoria for example now for the first time is going to be spending close to a billion dollars a year on corrections, they're building new prisons, imprisonment rates are increasing substantially in particular for women and young people,'' he says.

"It's becoming an unsustainable system and its impacting more and more on the budget so the Government now is actively looking for what new and different approaches might exist.  How do we structure service delivery so that it caters in a more appropriately and tailored way for people who experience multiple and complex needs?''

Associate Professor Mark Nolan from the Australian National University's College of Law agrees that prisons can sometimes be ineffective places for rehabilitating people, and in an environment of shrinking judicial discretion points to the use of Intensive Corrections Orders  (ICOs) as an emerging trend in sentencing options.

New South Wales and Victoria have had ICOs as a sentencing option for several years and the Australian Capital Territory has just introduced the measure.

He says ICOS can be more difficult for offenders than  community service orders. "You're actually ordered to a whole range of programming that you wouldn't otherwise get access to in prison and much more intensive correction but it's a community corrections outcome. It goes a long way to improving program delivery and that marries up with justice reinvestment.'' 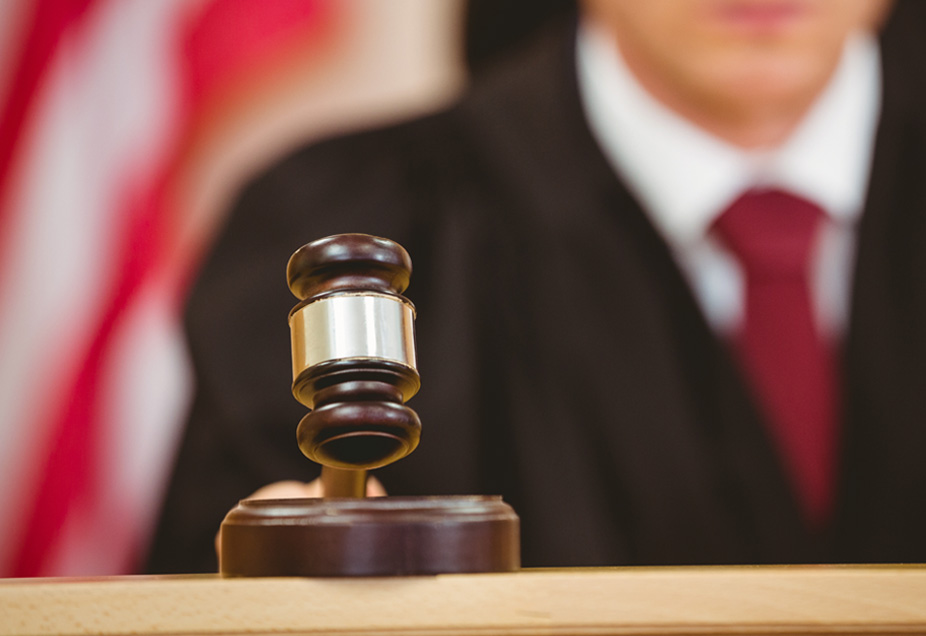 He suspects ICOs, like some restorative justice orders, will be much more emotionally engaging than any probation has ever been for an offender, and that being on remand, or a sentenced prisoner may be less engaging than having a scheduled program of education and direct confrontations by specialists as to why a person is offending.

The failure of suspended sentences, identified by Don Weatherburn, lies with the fact that there isn't the level of programming over time that may prevent reoffending.

Professor Nolan says populist policies – such as mandatory sentencing – have to be watered down if custodial imprisonment  is to be controlled.

"Other attempts to legislate discretion away are not going to improve the problem at all. What you really need are community-based sentences  like Intensive Corrections Orders that are more easily sentenced with the discretion of a judicial officer -  think of those options first rather than incarceration.''

He says the atmosphere in an overcrowded prison is not rehabilitative. "You won't be able to service programs, case manage individual prisoners, and won't be able to do the therapy that they need.''

Dr Lorana Bartels, Associate Professor at the University of Canberra says that we should be using community, corrections orders much more extensively, with offenders required to do some form of work and participate in programs such as drug and alcohol treatment, anger management, or parenting.

"It's a win for everyone – win for them and their families, and a win for the community because they can become functional members of society. And it costs an awful lot less.''

Most offenders serve 3-6 months and will return to the community at some point "so what's the point of putting them away in the first place rather than keeping them in community and rehabilitating  them there''.

She says sending these offenders to jail means they are going to get stuck in a cycle of offending without treating the  underlying causes.

"For most offenders it's mental illness, lack of education, employment, poor housing, and substance abuse issues. The overwhelming majority have some combination of these issues.''

She sees a need to explain to the public what sentencing is actually about, saying there are about 300 factors that judges and magistrates have to take into account.

"They don't just pick a figure out of thin air. When people are informed about those complexities they become more accepting,'' she says.

World-first research from the University of Tasmania  involving 987 jurors who returned guilty verdicts in 124 criminal trials from the County Court of Victoria between 2013 and 2015 supports this.

When asked to say what sentence they thought offenders should have received 62 per cent delivered more lenient sentences than the judge.

Governor of Tasmania, former director of the Tasmanian Law Reform Institute and Professor of Law at University of Tasmania, Kate Warner is the lead author of the Victorian Jury Project, which is currently undergoing peer review.

She told the ABC's Law Report program in April: "I think that just suggests then to judges and to policymakers that the public when they are informed … are not really clamouring for heavier sentences, and that perhaps judges and policymakers shouldn't necessarily respond to calls for heavier penalties.''

Perhaps appealing to our better angels and informing the public more may not only salvage lives but save the community a lot of financial pain  as well.