Does strong rule of law prevent the onset of civil armed conflict?

Working in fragile and post-conflict environments, I have been surprised to hear the term "rule of law" used so commonly. In my prior work as a lawyer in Australia, the term had seemed somewhat confined and definable as a means of ensuring that no person was above the law. In the humanitarian environment however, it seemed that the term "rule of law" was used as a catch-ll solution to a society's problems. I heard the term used in lieu of "human rights", "democracy" and even "gender equality". At a meeting of civil society organisations, the speaker purported that rule of law was the new hot ticket in international development and suggested that the term be included in all new grant proposals.

Given the amount of international funding that is being dedicated to advancing the rule of law in fragile and post-conflict countries, there is very little literature that accurately defines (and confines) the term. Further, there are very few studies, which objectively measure whether advancing the rule of law in a country really creates better outcomes for that country.

In 2014 I completed the Masters of Peace and Conflict Research at Uppsala University in Sweden. My thesis topic was inspired by a desire to quantitatively define and measure the effect of rule of law. Given the extreme increase in civil armed conflict across the world in the past 50 years, it seemed a good place to start was to examine whether strong rule of law can prevent the risk of the onset of civil armed conflict.

The thesis developed a new quantitative measure of rule of law and examined data on rule of law and civil conflict from 112 countries over the period 1970 to 2005. Using the statistical tool of logistic regression and controlling for the effect of other institutional and governance indicators, the results showed that strong rule of law does have a dampening effect on the risk of civil armed conflict.

Defining and measuring the rule of law

In its most confined definition, the rule of law means that no person is above the law. Broad definitions of rule of law include concepts such as free and fair elections, civil liberties and human rights.

While those concepts may, and probably do, have an effect on a country's risk of civil armed conflict, including such concepts into a rule of law measure, in my view, overly complicates the concept. From an empirical perspective, defining the rule of law more narrowly will lead to stronger results because we can better confine the indicators which are causing the effect on the other variable, here being the risk of civil armed conflict.

Defining and measuring the rule of law

Controlling for other variables that may prevent civil armed conflict

If we find that a country with high levels of rule of law is at less risk of civil conflict, how do we know that the reduction in risk is being caused by strong rule of law and not other factors such as GDP per capita or democracy?

The statistical model found that that the predicted probability of the onset of civil conflict in countries that have the highest level of rule of law is 7 per cent lower than in countries that have the lowest level of rule of law. The model is demonstrated in the graph below which shows that the predicted probability of civil armed conflict decreases as rule of law scores increase. 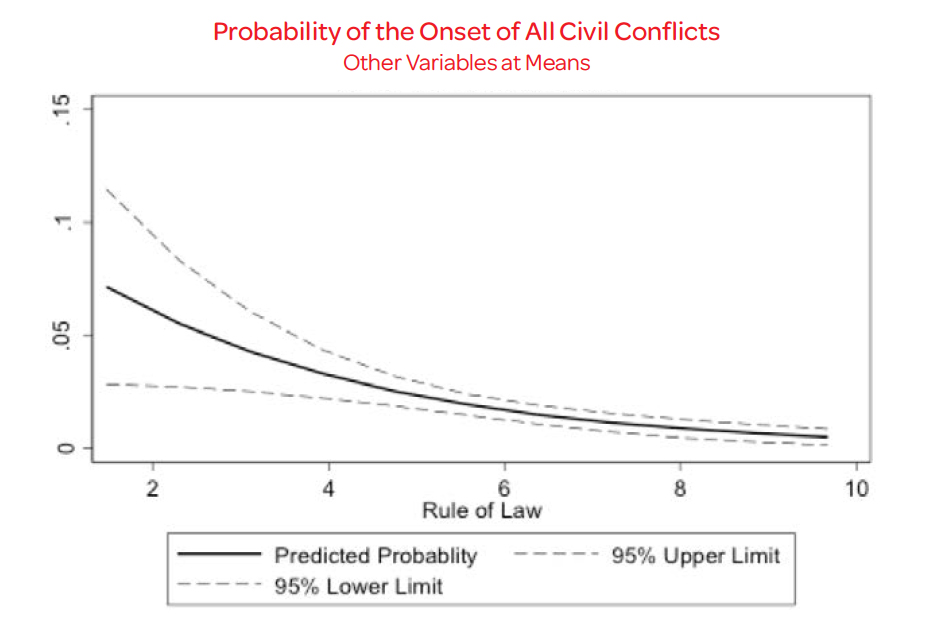 How does Rule of Law protect against civil conflict?

Thesis writing is not the in business of pointing out correlations and relationships between variables without suggesting that those two variables are indeed causally linked. The results above merely show us that the rule of law and the onset of civil armed conflict have a relationship. We can only theorise that one variable causes the other to happen. So how can we explain this relationship? With the help of many theorists, the thesis suggests that strong rule of law raises the opportunity cost of conflict. That is, that where there is strong rule of law, would be rebels, have a means of resolving conflict peacefully and hence it is less costly to pursue peaceful conflict mechanisms than it is to engage in violent conflict. Citizens have a means of peaceful conflict resolution with each other and with the government. Where there is strong rule of law citizens tend to have greater trust in their government. Public support allows governments to better address grievances and to develop solutions to problems that may otherwise escalate into violence. Further, where citizens feel that they have access to peaceful means of addressing grievances and disputes, the community is less tolerant of violence and rebels face difficulty in recruitment.

While quantitative political science studies are quick to receive the tag of being overly scientific and out of touch with the real world, quantitative analysis is important in really understanding whether policies can make a difference to communities. Given its popularity in the policy building world, the  rule of law is an under-researched concept. With the emergence of new  rule of law data and measurements, future studies should be able to disaggregate the data to be able to better understand the effect of each  rule of law indicator on other variables such as development and health.

For now however, the results show that higher levels of rule of law decrease the risk of civil conflict. That result in itself is enough to corroborate funding  rule of law projects in fragile and post-conflict environments. Another question all together is whether that funding is translating into better  rule of law outcomes.