Supporting the rule of law in Myanmar 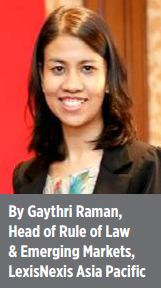 I was first introduced to Myanmar by our customers. Sometime in early 2013, I started receiving queries from lawyers and businesses in Japan, Singapore, Korea, Hong Kong and Malaysia about the country. Some were about to start doing business there, some were already there and plans were underway for significant investment into the country. They wanted to know if LexisNexis was there supporting the rule of law, and whether we were able to help them gain clarity of the myriad of rules, regulations, policies (or lack of them) to help as they navigate their way around doing business in Myanmar.

I set out on my first visit with a huge amount of excitement and a little bit of trepidation. I had read a lot about the country; a lot of the literature was focused on what the country lacked in the rule of law, its shortcomings and the hardships of the past. I wondered how we could move the needle and really make an impact. I wondered if the country was ready.

I remember being pleasantly surprised as I arrived in Yangon. The city is beautiful with a healthy vibe of old versus new. It is experiencing a rebirth with every single native thrust into this fast-paced, constantly evolving new world, adjusting to the change. That first visit showed me the people of Myanmar seemed to be enjoying the adventure and they were thriving.

I met with local lawyers who described how overwhelmed they were with the influx of foreign entities calling on them. They were excited, of course, but couldn't figure out how to effectively communicate or help their customers. They wanted training to build up their competencies and wanted to better lawyers. I met with foreign lawyers and businesses that were in Yangon, executing on expansion plans, investing millions in the country. Myanmar was closed off from the world for decades and so existing laws and regulations were not necessarily adequate for the present-day world. Parliament was legislating furiously but we all needed to get it right, and everyone wanted to get it right.

I was invited to a meeting with Daw Aung San Suu Kyi, Chair of the Parliamentary Rule of Law Committee in August 2013. This amazing encounter was an intense 30-minute brainstorming session about what Parliament and its MPs need to build capacity and competency, what the rule of law means to the country, and how LexisNexis could play a role in making the laws of Myanmar accessible and consumable to its citizens.

The government of Myanmar has been welcoming and supportive. The Union Attorney General's Office is a strong partner in our efforts to support the rule of law in the country. We work with various Ministries and officers within the government where I have always been treated with respect and my views sought and considered as relevant programs and initiatives for the good of the country are planned.

I am regularly asked to discuss ways in which the country can improve the "Ease of Doing Business Index" and ways we can work together to foster Public Private Partnerships in various plans the government is currently implementing.

We organised a Constitutional Awareness Workshop for lawyers in Yangon (in October 2013), and we facilitated open dialogue on the constitution, the need for reform and what the legal profession can do to support this. It was met with overwhelming success. We were free to debate, discuss and inspire action.

We also organised the inaugural "Business for the Rule of Law" Consultative Workshop with the United Nations Global Compact in Yangon (in October 2014), inviting the business community to discuss challenges they face in the country and ways in which the business community can strengthen the rule of law in Myanmar. We had overwhelming attendance to our event and a robust dialogue on "what can we do more to help?" from the participants.

I am not consciously painting a rosy portrait of the country. I am painting a hopeful one. Those who are there have the will to move forward. There is a seeming lack of bitterness in the hand they had been dealt. There is a conscious decision to look to the future, to plan ahead so as not to dwell in the sorrow of the past. I am sure they remember and they learn from it. I hope we are all inspired by this outlook.

I have travelled to Myanmar regularly since that first visit in 2013. Every single visit has given me renewed excitement, inspiration and hope for what is ahead for Myanmar's future. As is the case with every developing country, she faces a myriad of challenges and has a long journey ahead of her. LexisNexis is committed to supporting her journey toward a better future.