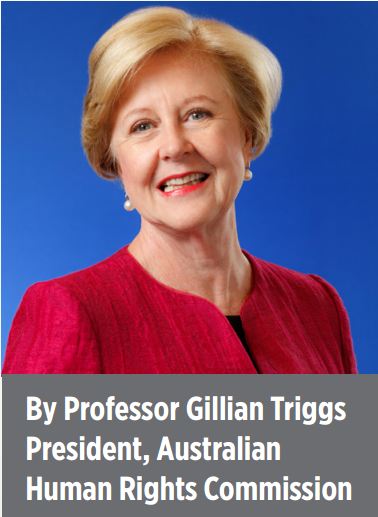 Usually when there is public discussion of Australia's international human rights obligations, it is assumed that it falls to government to ensure that people in Australia enjoy their human rights. However, businesses have a key role to play in achieving practical human rights outcomes.

The Commission works with the business community because we recognise that it is not only the cause of the problem in many respects, but it is also the solution. The Commission has created resources to help employers promote diversity and prevent discrimination, including a suite of free online resources called Good Practice, Good Business,i an online hub to assist employers to prevent discrimination, respect human rights and promote diversity,ii and a Business and Human Rights Network to allow for the exchange of information and discussion about business and human rights issues.iii

But businesses can play a crucial role not only in respecting and protecting human rights, but also in promoting rights. A great example of this is the desire and commitment by many employers to actively increase the representation of Aboriginal and Torres Strait Islander peoples in their workforces.

Recently the Commission became aware through the Business Council of Australia that employers who wanted to conduct targeted recruitment programs for Aboriginal and Torres Strait Islander people were concerned that to do so would risk breaching discrimination laws. They believed that they would need to apply for exemptions from the operation of discrimination laws to proceed with such recruitment.

The operation of race discrimination laws

At the federal level, the RDA prohibits discrimination on the basis of race, including in employment.iv There are very few exceptions to the general prohibition on racial discrimination in the RDA, and there is no ability to apply for an exemption from the application of that Act (as will be discussed later in this article).

However, s 8(1) of the RDA provides that "special measures" will not constitute unlawful discrimination under that Act.v

Employers operating in Australia must comply with the RDA, but also with the discrimination law which applies in whichever states and/or territories in which it operates. All Australian jurisdictions have laws which prohibit racial discrimination in connection with employment.

Each of the state and territory discrimination laws contain exceptions to the general rule that people must be given the same opportunities regardless of their race. The two types of exceptions which are most relevant to employers seeking to conduct targeted recruitment of Aboriginal and Torres Strait Islander people are special measure provisions and "genuine occupational requirement" provisions. The table below sets out the applicable discrimination law in each jurisdiction, and whether it contains one or both such exceptions.

The wording and scope of the genuine occupational requirements exceptions vary across the different jurisdictions. For example, subs 25(1) of the Anti-Discrimination Act 1991 (Qld) is drafted in very broad terms, providing that "[a] person may impose genuine occupational requirements for a position". By contrast, in NSW the exception in s 14 of the Anti-Discrimination Act 1977 specifies the types of roles that will be covered:

(a) participation in a dramatic performance or other entertainment in a capacity for which a person of a particular race is required for reasons of authenticity,

(b) participation as an artist's or photographic model in the production of a work of art, visual image or sequence of visual images for which a person of a particular race is required for reasons of authenticity,

(c) working in a place where food or drink is, for payment or not, provided to and consumed by persons in circumstances in which a person of a particular race is required for reasons of authenticity, or

(d) providing persons of a particular race with services for the purpose of promoting their welfare where those services can most effectively be provided by a person of the same race.

Employers will accordingly need to check the wording of the particular genuine occupational requirements exception available in the jurisdiction/s in which it operates to see if the jobs they intend to advertise would fall within that exception.

Based on my experience, special measure provisions are perhaps the aspect of Australian discrimination law that are the least well known or understood.

Discrimination laws protect the right to equality and non-discrimination. However, these laws recognise that promoting the right to equality does not always mean identical treatment among different groups. As the Victorian Civil and Administrative Tribunal has recognised, "access to opportunity may not be available to all … unequal results can arise from equal treatment and so steps may need to be taken to create true [substantive] equality".vi In certain circumstances, it is necessary to take positive action to address the entrenched disadvantage suffered by a certain section of the population, in order that they may have similar access to opportunities as others in the community.

These positive actions are referred to as:

For the purposes of this article, the term "special measures" is used generically to refer to these types of positive actions.

A program which targets Aboriginal and Torres Strait Islander people for employment opportunities to redress their under-representation in a workplace is an example of a special measure. Such a program might include:

Provided a targeted recruitment program meets the requirements of a special measure, it is lawful under discrimination law (other than in New South Wales, where an employer is required to seek an exemption).

Five requirements for targeted recruitment to be a special measure

The core elements of a special measure are essentially the same under the RDA and state and territory discrimination laws. The following test consolidates the various requirements under these laws in the different jurisdictions. To meet the test for a special measure in all jurisdictions, an employer must be able to show that a targeted recruitment strategy:

A case which illustrates how many of these requirements can be met is the Victorian Civil and Administrative Tribunal decision below.

The applicant also led evidence that as at June 2009, the University employed approximately 7,270 people, only 30 of whom were Indigenous. The applicant itself had one Indigenous employee out of a staff of 15.

The applicant stated that it sought to redress the imbalance in terms of the representation of Indigenous Australians within the University (and within the Australian art museum profession as a whole) by appointing only an Indigenous person to the position.

The Tribunal assessed the applicant's proposed targeted recruitment measure against the requirements for a special measure under s 12 of the EO Act (these requirements are subsumed within the 5 requirements mentioned above).

In terms of the requirement in the EO Act that the measure be justified because there is a particular need for advancement or assistance (e, requirement 1 above, was it necessary because members of a racial group were disadvantaged because of their race), the Tribunal held that:xiii

The ABS information … makes clear that Indigenous Australians as a group suffer many forms of disadvantage. Of most relevance here are the lower rates of employment, lower income levels, matters relating to health which impact on a person's overall wellbeing and the rates of discrimination … that material establishes the need for advancement and assistance so that Indigenous people have greater opportunities for employment and that an appropriate way to achieve that end is, from time to time, to reserve positions for Indigenous applicants only.

In relation to the requirements in the EO Act that the purpose of the measure be to promote substantive equality for members of that racial group, and that it be undertaken in good faith (covered by requirements 2 and 3 above), the Tribunal found that:

In relation to proportionality, the Tribunal stated that:xv

At present, out of a staff of 15, only one employee of the applicant is Indigenous. As at June 2009, across the University as a whole Indigenous employees represented less than 0.5% of the staff. That figure is dramatically less than the number required to represent the proportion of Indigenous people in the wider population. In these circumstances, the proposed conduct is a proportionate means of achieving the applicant's purposes.

The Tribunal therefore concluded that the "conduct bears upon its face the clear stamp of a special measure".xvi It accordingly made a declaration (under s 124 of the EO Act) that the proposed targeted recruitment was a special measure as permitted under s 12 of the Act.xvii As the applicant would therefore not discriminate against a person contrary to the EO Act by taking the measure, the Tribunal held that no exemption under s 89 was necessary, and struck out the applicant's application as misconceived.xviii

As mentioned earlier, there is no relevant special measures provision under the Anti-Discrimination Act 1977 (NSW) (the NSW Act). It is therefore necessary for employers wanting to conduct targeted recruitment for Aboriginal and Torres Strait Islander people in New South Wales to apply for an exemption from that Act.

In all jurisdictions other than New South Wales, the granting of an exemption is not a legal prerequisite for conducting a targeted recruitment strategy, as long as the recruitment program meets the requirements of a special measure. The purpose of an exemption is to exclude the application of a particular law to certain conduct which would otherwise breach that law. However, an action that meets the requirements of a special measure will not be unlawful, because it already falls within a recognised exception to discrimination law.

Despite this, some employers may choose to apply for an exemption for a targeted recruitment strategy, and may be granted one in some jurisdictions, even though the proposed conduct meets the requirements of a special measure. However, when employers apply for exemptions to protect special measure conduct, they may not be successful. The granting of exemptions is discretionary, and the case law in some jurisdictions is inconsistent.

Generally, the bodies with the power to grant exemptions consider whether an applicant requires an exemption in order to avoid breaching discrimination law. If the conduct meets the requirements for a special measure which is permitted under the relevant law, these bodies may refuse to grant an exemption.xix

Finally, it must be recalled that there is no exemption process under the RDA. This means that even if an employer is granted an exemption under a state or territory discrimination law, its targeted recruitment program must still meet the criteria for a special measure, to comply with the RDA.

Employers wanting to promote the rights of Aboriginal and Torres Strait Islander people by conducting targeted recruitment programs should utilise the special measure provisions in the RDA and state and territory discrimination laws.

Note: This article was originally published in Employment Law, November 2015, Volume 21 No 10