Magna Carta and the rule of law 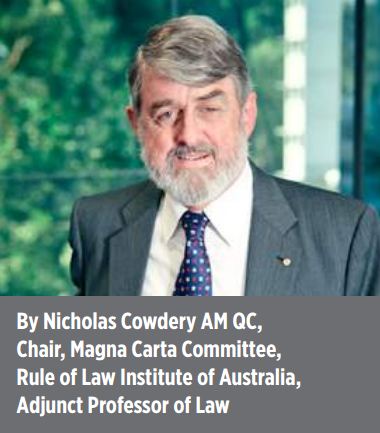 All educated persons, especially (but not only) those in places with an English heritage, think they know what the Magna Carta is and why it is important to our lives – but it is always helpful to stop and think about objects that have passed into legend and that over time have acquired significance and value that the originators could never have foreseen. A common view is that King John made an agreement with the barons in 1215, that the document became "law", it created rights, it has been construed and applied ever since and it is the source of most that is good in public administration — including democracy, the separation of powers, the rule of law, the independence of the judiciary, trial by jury and equality before the law. That is only partly true. The real story is much more interesting (although perhaps not as satisfying), but there is space here to tell only some of it.

A document was sealed by King John on 15 June 1215 at Runnymede (sometimes an island, sometimes a riverbank, unnamed until this event). It was on the River Thames between Windsor, his residence at the time and Staines; a good distance from Westminster which was then occupied by the barons and merchants. That document was the Charter of Liberties (not the Magna Carta) and that sealed copy has been lost.

The document contained 63 clauses, the first and most important granting liberties (freedoms from royal control) to the Church, not the barons. "Free men" (perhaps up to 40% of the population of England of between two and four million people) then had their liberties declared in subsequent clauses.

The Pope annulled it in August 1215 and King John repudiated it in September – so it had a very short life.

Perhaps 30 copies of the Charter were made and they were still being copied, economically on expensive vellum with many abbreviations to save space, in July. They were taken to county courts throughout the land to be read aloud in Latin and French. Only four of the 1215 documents are known and they were exhibited together for the first time in the British Library and House of Lords in February this year. 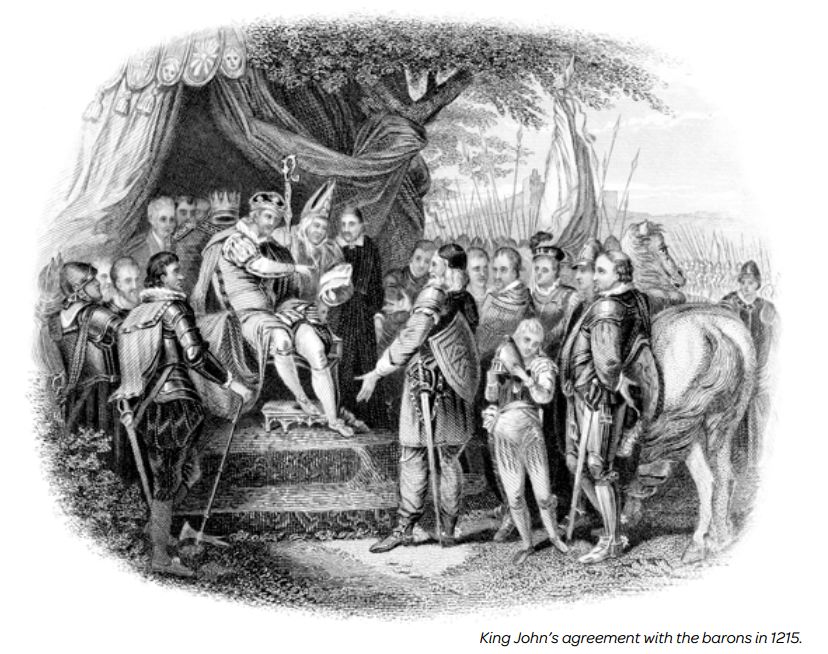 So the reality is that the name Magna Carta dates from 1217, it is to be found in many documents spanning 85 years and not all identical, it did not create much that was new but rather declared existing laws and usages and it has never been a "law" of the land. Its principal other party was the Church, not the barons. Its significance, however, lies not so much in the text but in the principles behind the text – the values and concepts that support it.

The rule of law is one of those concepts and it may conveniently be described in the words of the Secretary-General of the United Nations:

"For the United Nations, the rule of law refers to a principle of governance in which all persons, institutions and entities, public and private, including the State itself, are accountable to laws that are publicly promulgated, equally enforced and independently adjudicated, and which are consistent with international human rights norms and standards. It requires, as well, measures to ensure adherence to the principles of supremacy of law, equality before the law, accountability to the law, fairness in the application of the law, separation of powers, participation in decision-making, legal certainty, avoidance of arbitrariness and procedural and legal transparency."

The Magna Carta has provided inspiration and support for progressive development in governance worldwide since the Middle Ages. It stands for:

It is also said to have been the origin of the law of trusts and an early example of the protection of women's rights (in that widows were not to be forced to remarry and would take their inheritances). It also dealt with a multitude of local and temporal regulations that are of less enduring significance but which secured common freedoms. Magna Carta, as it has come to be understood and called upon over 800 years, operates as a shield against tyranny, abuse of power and oppression of the governed. It has become the talisman of a society in which the spirits of tolerance and democracy reside. In the English common law system, it is the touchstone of the rule of law and a continuing inspiration to all.

In the 1930s the small King's School in Bruton in Somerset in the English West Country acquired an original 1297 Magna Carta. In 1951 the impoverished school took it to the British Museum for authentication, which was duly made, with a view to sell to raise money. It was formally identified as an original of the 1297 Magna Carta, at that time one of only two known to exist (two others were discovered later). There is uncertainty about how it came into the school's possession, but the best account seems to be that in the decades before, the school's lawyer, who had been keeping the document for someone else whose family had probably acquired it from Easebourne Priory in Sussex, put it into the school's documents box by mistake.

The British Museum was prepared to offer £2,000-2,500. The school had it independently valued at £10,000 (£12,500 with seller's commission), but the British Museum would not move and the school engaged Sotheby's. After much manoeuvring (a story in itself) the Library Committee of the Australian Parliament purchased it in 1952 for £12,500 (15,672 Australian pounds) and the document is now on display in Parliament House, Canberra. An area in Canberra near Old Parliament House has been designated Magna Carta Place.

The United States of America has another original of the 1297 charter, purchased in 1983 by Ross Perot for $US1.5 million from the Brudenell family of Deene Park in Northamptonshire. In 2007 Perot sold it for $US21.3 million to David Rubenstein, who has since gifted it to the US National Archive.