Giving a Voice to Human Rights

Kristy Fleming, CEO and Founder of Voice - a charity committed to giving a voice to marginalised and disempowered people - spoke to Capital Monitor of the work Voice undertakes in Cambodia. 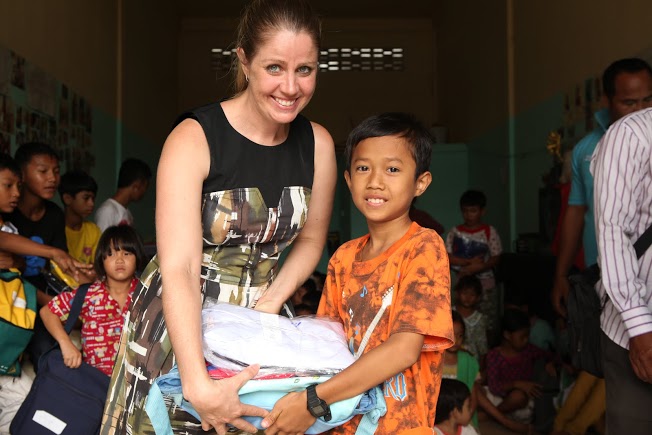 Cambodia is one of the most corrupt countries in the world. [1] More than 60 per cent of people reported having to pay bribes to the judiciary, police, registry services, and land services over the past year. [2] Kristy Fleming, Chief Executive Officer and Founder of Voice - a charity, committed to giving a voice to marginalised and disempowered people - says that despite the Declaration of Human Rights (enshrined in Cambodia's Constitution) affording everyone the right to food, clothing, housing, medical care and necessary social services, the reality for the almost 20 per cent of people in Cambodia that live below the poverty line is significantly different. [3]

"I worked for the United Nations in Cambodia for five years – fighting corruption and ensuring all Cambodians have basic human rights from the top down seemed as impossible as an echo without a voice to start it," Ms Fleming said. "I recognised that a different approach was needed."

Launched in early 2012, Voice is an Australian charity with community-based operations in Cambodia, which provide people in crisis with access to their fundamental human rights.

With very little resources, Voice now runs two 24-hour community crisis centres in slum areas of Phnom Penh, and assists hundreds of people each year to get out of crisis and regain financial independence. Voice provides emergency housing and healthcare for the homeless and sick, a soup kitchen pro­gram to eradicate hunger, school packs and scholarships to get children off the street and into school, and employment opportunities and small business loans for parents, carers, and adults otherwise unable to meet their basic daily needs. The charity's outreach and individualised case management ensures that people in crisis are provided with the resources, skills and support to sustainably improve their lives. "When I first visited Cambodia over a decade ago, I was travelling around the countryside, and as I went from village to village, the people kept telling me about an amazing organisation that had given them fishing nets," Ms Fleming recalled, while thinking back to the time she saw the hardship of rural Cambodians for the first time.

"They were so happy with their new nets. They could catch enough fish for their families and sell any left-overs. After inquiring further about this project, I found out that it was run by a large international health project to fight malaria – and the fishing nets were actually intended to be mosquito nets."

The mosquito nets were useless to protect against malaria once they had been placed in water which washed off the chemicals meant to keep mosquitos away, Ms Fleming said. The project had clearly been ineffective in achieving malaria prevention, but very effective at providing the people with what they wanted - a means to improve their livelihoods.

"This was a valuable lesson for me," Voice's founder added.
"I learnt that you cannot attempt to meet people's secondary needs without first meeting their primary needs. I also learnt that instead of sitting in an office reading statistics and providing a generic solution, it is crucial to talk to people about what they want and need."

In this case, the people had wanted food and a source of income before a defence to malaria. Had the health organisation asked them, that is what they would have been told. Evidently nobody had asked. "The lesson I took away was that the people themselves are best placed to identify their needs, and are instrumental in identifying the most sustainable (and often innovative) methods of achieving those needs, and improving their own lives. The best intended aid organisations often miss one crucial step in their planning phase – to ask the people themselves."> 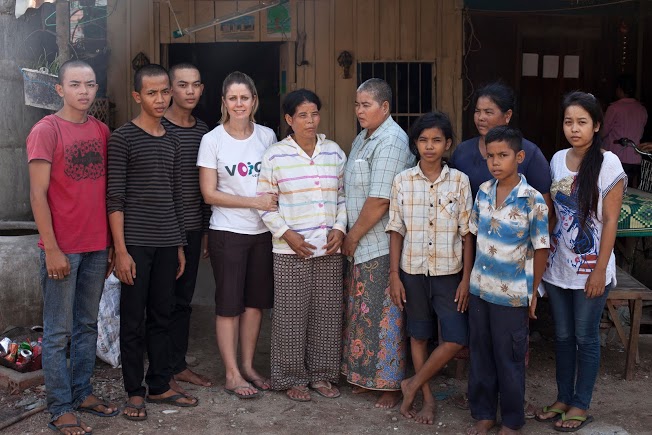 Voice's work is inextricably linked to the human right to dignity, freedom of expression, and meaningful participation as enshrined in international human rights law. The charity recognised a common gap in existing interventions between hearing and recording people's stories, and developing interventions to assist the same people realise their human rights –a need to ensure that people are, not only consulted, but given the opportunity to drive their own future.

"Voice starts these discussions – we aim to find practical solutions in collaboration with the people themselves," Ms Fleming added.

"In Cambodia, human rights are not fully realised for many people and this is particularly true for the individuals and groups Voice works with including women and children. Fundamental human rights such as the right to life, food, quality health care and education regularly remain unfulfilled."

Furthermore, many people in Cambodia also face violations of their right to freedom from slavery (often in the form of debt bondage and human trafficking), freedom from torture, inhumane or degrading treatment, and freedom from wrongful imprisonment.

"When I started Voice, I wanted to institute an individualised approach to helping people - one that took the time to identify people who were most in need and ask them how they wanted their lives to improve, and the best way they saw to improve it," the Voice CEO said.

Surprisingly, this practical, common-sense approach is quite innovative in the development industry in Cambodia. And maybe not so surprisingly, this approach produces the most cost-effective and impactful solutions to helping a person out of crisis.

For Lina, it came in the form of a forced eviction. Lina used to have a thriving business selling smoked fish by a lake in central Phnom Penh. But when the lake was filled with sand, to make way for new development in the rapidly growing capital of Cambodia, she was evicted from her home. All of a sudden, Lina was homeless. What's more, she had no means to earn an income. One is hard pressed to catch a fish in a lake filled with sand. Her children began to beg and collect rubbish in order for her family to earn enough to eat.

But all was not lost, Lina told Voice. All she needed was enough money to buy a first lot of fish from the market. After that, she said, she could increase the price of her smoked fish enough to buy the next lot from the market. If all went according to plan, she would net enough profit to rent a house and allow her children to stop working.

Lina had a plan - all she needed was the means. That's where Voice usually comes in. The charity provided Lina with a $50 interest-free loan, which she agreed to pay back within six months. Indeed, she paid back the loan within four months. She also doubled her income, and rented a house. Voice also helped Lina's two boys, by way of school uniforms and school supplies, to go to school for the first time.

With minimal assistance, Lina and her two boys went from crisis to independence. Voice was able to identify what assistance would be the most cost-effective and beneficial just by listening to Lina tell her story.

"This is how Voice works," Ms Fleming points out.

"We listen to people, take the time to understand their situation, and empower them to improve their lives in the ways they want. For example, a family of garbage collectors asked us for $2 headlamps so they could more effectively collect rubbish at night when it was cooler. It was an easy and practical way to increase their income and improve their lives -  we would never have thought of it if we didn't ask." 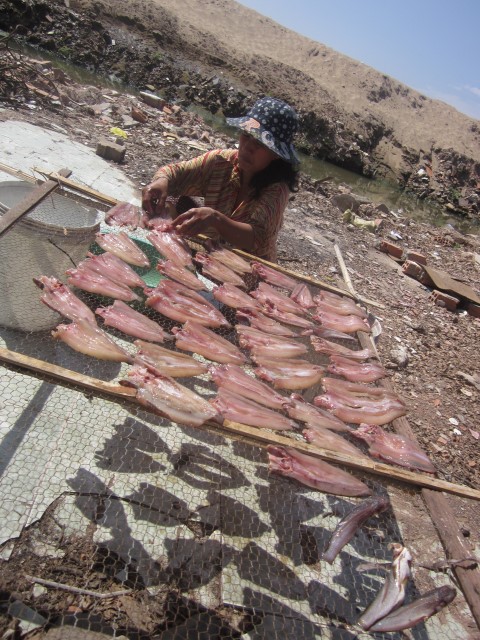 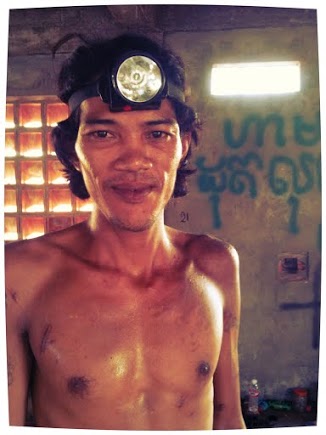 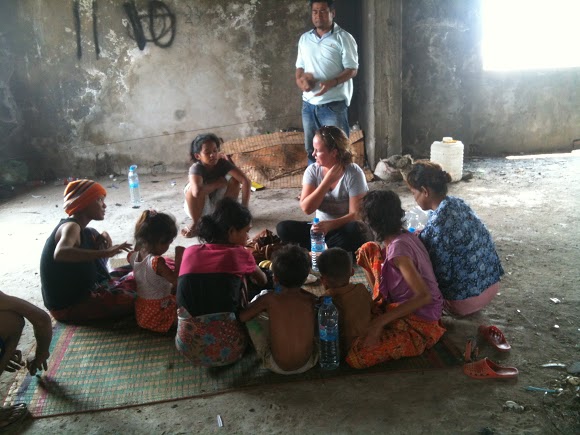 Voice works closely with people who have been forcibly evicted from their homes and listens to the devastating impact these events have on individual and family lives. The human impact of forced evictions includes, inter alia; increased poverty, homelessness, psychological trauma, health problems, loss of livelihood, removal of children from schools, increased crime and family breakdown.

In 2012, when Voice was launched, the charity first met five-year-old Srun. He was selling bags of corn on the street for 15c each. He was naked and his stomach bulged. He appeared lethargic and sick. Srun and his family said they hadn't eaten in a couple days.

"We immediately went off to buy them some rice and fish," Ms Fleming said.
"We also got some clothes for Srun."

On full stomachs, the family shared more of their story. Srun and three of his siblings were sick. Voice took them to the doctor. Srun's protruding stomach wasn't due to severe malnutrition, and Voice was surprised to learn that it was instead due to an enlarged spleen caused by a severe genetic blood disorder called Thalassaemia Major.

Left untreated, a child with Thalassaemia Major is lucky to survive until their 6th birthday. There is no cure. Srun needs monthly blood transfusions and iron chelation medication for the rest of his life, like each of the estimated 1 in 100 Cambodian children born with  Thalassaemia Major each year.[6]

Although Thalassaemia Major is so common in Cambodia, there is also a severe blood shortage. Even when a child is correctly diagnosed and can afford to get to the hospital, he or she often does not receive a blood transfusion.

Srun's family had racked up a debt with their local motorbike taxi driver, who had taken him to the hospital before. The taxi driver was beginning to doubt the family's ability to pay back the debt, and so had begun to refuse to take them. Voice loaned Srun's father a motorbike so he could take Srun to hospital when needed. He could also earn money as a motorbike taxi driver during the day. Voice also initiated a regular volunteer blood donation drive to assist Srun and the many other Thalassaemia patients to receive the life-saving blood transfusions they need.

"Srun and Lina's problems are not easy to fix, but nor are they impossible to address," Ms Fleming said. "Homelessness, child labour, severe hunger, human trafficking, and even child and maternal deaths are preventable with appropri­ate and timely action."

The Declaration of Human Rights states that everyone has the right to food, clothing, housing, medical care and necessary social services. This is not a reality for many people in the world. Help make it one. All donations to Voice go directly to people in crisis in Cambodia. If you would like to assist, please donate at www.voice.org.au/donate and follow Voice on Facebook at www.facebook.com/voiceinternational

[1] Cambodia has been ranked 160th out of 177 countries in Transparency International's 2013 Corruption Perceptions Index.

[4] Based on investigations conducted by Licadho Cambodia, Licadho Canada claim that over 500,000 Cambodians have been affected by forced evictions since 2003 with over 2.2 million hectares of Cambodian land being granted to large firms in the form of economic land concessions. Licadho Canada [2014], Land Grabbing in Cambodia, online at http://licadhocanada.com/about-cambodia/land-evictions-in-cambodia/

[6] This figure is based on a report finding 30-40% of Cambodian people are carriers of the Thalassaemia gene (Informa Healthcare [2006], The Prevalence and Molecular Basis of Hemoglobinopathies in Cambodia) combined with the well-documented body of research that states if two carriers reproduce they have a one in four chance of having a child with Thalassaemia Major (eg. Thalassemia Foundation of Canada [2014] http://www.thalassemia.ca/resources/faq-2/)