LexisNexis employees across the Pacific had the opportunity to enter 500 words or less explaining what they have done to help advance the rule of law for a chance to win a trip to Phnom Penh, Cambodia, to visit the two crisis centres run by Voice. The lucky winners were Laura McKnight and Caron Wadick, both from the Sydney office, Australia. Laura's application was successful due to the work she did leading the fundraising activities LexisNexis Cares Committee (LN Cares) ran in 2013, raising AUD$25,000 for Voice. Caron's winning application was selected on the back of the pro-bono legal aid work she carries out in communities in need within Sydney.. 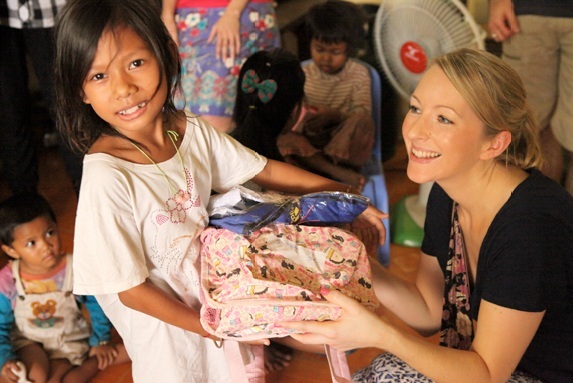 Caron and Laura travelled to Phnom Penh with Tyson Wienker, LexisNexis Executive Director of Strategy and Product Development who also leads the Asia Pacific Rule of Law team. Kristy Fleming, CEO and Founder of Voice hosted Caron, Laura and Tyson for two days taking them to visit the children and families the charity works with and supports in Cambodia.

A packed day planned, the team set off at 7am in a local tuk tuk and headed for a tour of Tuol Sleng Genocide Museum, a former high school which was used as the notorious Security Prison 21 (S-21) by the Khmer Rouge regime from its rise to power in 1975 to its fall in 1979. On the way to the tour Kristy explained that visiting the museum, although very harrowing to learn about the terrible atrocities that occurred there only 35 years ago, would help us gain a better understanding of Cambodia's history and explain its constant struggle to get its people out of poverty, and its authorities out of corruption.

After the tour and a quick debrief on what we'd learned we were back in the tuk tuk and off to meet Srun and his family while they were selling corn to tourists, as they do most days. Srun is a little boy who suffers from a genetic blood disorder called Thalassemia Major, a condition that requires regular blood transfusions. As blood is in severe shortage in Cambodia Voice has set up a volunteer blood donation drive to support Srun and his family with this much needed healthcare. Supporting the blood drive by volunteering to donate while visiting Phnom Penh is one of the ways LexisNexis has been able to support Voice in its quest to provide the basic human right of healthcare to people like Srun and his siblings.

The next stop was to visit Voice's inner city crisis centre to meet the children Voice enables to get back to school and educated. LN Cares has been promoting and planning a massive fundraising event to raise money for the Back 2 School campaign, launched by Voice, to raise the AUD$20,000 required to get more than 100 children back to school this year. This money goes towards school fees and scholarships for many of the children, and provides them with school packs that include uniforms, note books, text books, pens and pencils to equip children with everything they will need for a successful school year. Caron, Tyson and Laura were privileged enough to visit at the time of year the children receive their packs.
"It was really fulfilling and touching to be able to give the children the packs that LexisNexis helps to provide and see the delight and happiness on their faces," Laura said of the experience.

In the afternoon Kristy took the LN team to a site where a family Voice works with still lives, even after many others had lost their homes and livelihoods after being forced to abandon the land so it could be turned into a development site. It was both eye opening and sad to see such a large section of land where many families once lived and worked be reduced to wasteland. Even worse was seeing the one remaining, lonely looking tin roof of a house that had survived the demolition where this family of four still live in what is left of their unsafe, unstable 'tin roof' home.

The team then went on to donate blood so that vouchers for blood transfusions could be given to Srun and his siblings.

On the morning of day two Kristy took the team to meet a family living with inherited blindness and HIV. Voice gives invaluable assistance with this family's much needed healthcare and helps to get the children into school. Caron, Tyson and Laura delivered school packs to the children in the family including one young girl suffering with HIV. They were also able to see how the family makes a living by breeding livestock just outside their home, a living that was enabled through Voice who bought the family their first pig to breed. This is another success story of how Voice gives people in crisis the means to gain independence and support themselves, providing opportunities for a better future.

Back 2 School pack round two

After lunch the team went to deliver the rest of the school packs to the children at another Voice community crisis centre, run by Cambodian kickboxing champion and national hero, Eh Phutong. As well as handing out the packs the team was treated to a kickboxing dance performance from the children, one of the many activities the children are encouraged to do. This helps them learn discipline, have stability, a sense of belonging and teamwork, and of course have fun.

Kristy also organised for the team to visit the Dean of RULE law faculty in Phnom Penh. This was a very insightful visit as the team learned about the law school and the resources it has to educate its students. It was exciting to see some LexisNexis publications that had been donated over the years. This was an important part of the trip as a large part LexisNexis' global mission to advance the rule of law means being able to help countries like Cambodia develop by educating its population so it can grow and change for the better of the country and generations to come.

LexisNexis is interested in exploring opportunities to assist organisations like RULE by providing access to legal publications and help more young people into law school through scholarships and other means, so they can improve their lives and the lives of others.

LexisNexis Pacific chose to support Voice because its ethos and mission to give people access to their basic human rights aligns perfectly with LexisNexis' mission to advance the rule of law around the globe. As one of the most corrupt countries in the world, Cambodia is arguably the county most in need of support in advancing the rule of law, particularly in the Asia Pacific region. LexisNexis is proud to support Voice, a charity that makes a massive difference with minimal resources, on its journey to give basic human rights to people in crisis so they can gain independence and improve their own lives.

Bree Moody, LexisNexis Executive Director Sales, who leads the LN Cares Committee in the Pacific, also holds the role of Vice President on the Voice Management Committee. In her role Bree is working closely with the committee to find ways to better sustain funding and support for Voice in the long term. The committee is looking for other corporate and professional organisations that want to make a difference to the lives of disempowered people in Australia and Cambodia to come on board and get involved.

In 2013 LexisNexis raised AUD$25,000 for Voice through bake sales, raffles, a wine tasting event, monthly employee drinks, quiz night and other fundraising events along with an in-kind donation drive to collect toys and clothes to send to Cambodia. LexisNexis also applied for funding from the Reed Elsevier Cares program to donate to Voice, from which we obtain more than AUD$7,500.

The focus for this year's fundraising is an online silent auction, which was launched here in mid-November. Alongside the auction LexisNexis has been raising funds throughout 2014 with activities such as the autumn and spring lunch, monthly drinks and quiz nights. This year the committee aims to raise more than the AUD$25,000 raised in 2013 to help Voice with its back-to-school program and other projects.  The silent auction will be open anyone who wants to either donate or bid. If you would like to find out more about the auction and find out how you can help please contact Laura McKnight at laura.mcknight@lexisnexis.com.au or call +61 2 9422 2957.