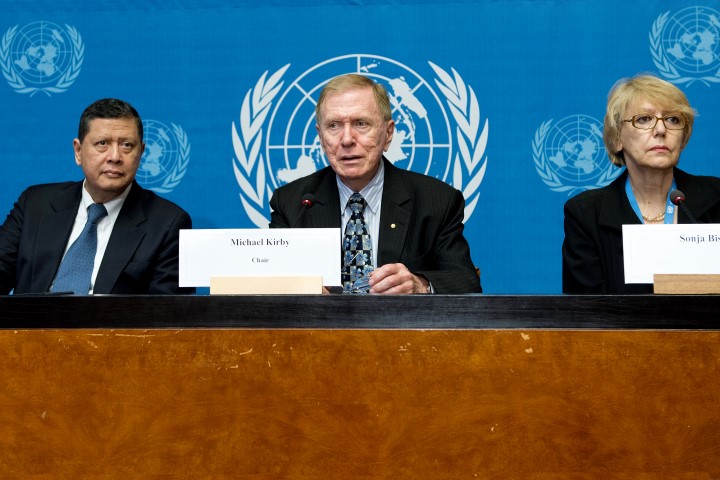 Following years of adverse reports, and recent unsatisfactory experience during the Universal Periodic Review, the UN Human Rights Council in Geneva in May 2013, established a Commission of Inquiry (COI) on alleged human rights abuses in the Democratic People's Republic of Korea (DPRK) (North Korea). The Hon. Michael Kirby AC CMG was appointed Chair of the COI. Other members were Marzuki Darusman (Indonesia), and Sonja Biserko (Serbia). The COI was created without a call for a vote. It reported within time, unanimously, and in a document made vivid and readable by its inclusion of extracts from testimony of victims collected during public hearings.

The COI refrained from concluding that 'genocide' had been proved; but only because of the narrow meaning attributed to that crime by current generally accepted international law. Nevertheless, the COI reported that many 'crimes against humanity' were established to the standard of reasonable grounds, justifying consideration by an international prosecutor of bringing a prosecution against those responsible. The COI gave notice to the Supreme Leader of North Korea that he might himself be found to be personally accountable for such crimes, including on the footing that he had the power to prevent, or sanction them, but had failed to do so. Throughout its inquiry, the COI was given no cooperation by North Korea. Its members and investigators were refused access. North Korea is a highly secretive state observing what the COI concluded was a 'totalitarian' form of government.

The report of the COI was well received by the organs of the United Nations. It was praised by most of the members of the UN Human Rights Council (HRC). Only 6 nations (China, Cuba, Pakistan, Russian Federation, Venezuela and Vietnam) voted against adoption of the HRC resolution. They did not seek to defend North Korea's record. They simply declared themselves opposed to 'country specific' inquiries. North Korea condemned the report as the hostile act of its political enemies.

Exceptionally, 3 members of the Security Council (France, United States of America, and Australia) convened an 'Arria' meeting on 17 April 2014 in New York. Despite pressures applied to discourage their participation, 13 members of the Council attended this briefing. Of them, 10 spoke, all affirmatively on the COI report. Specifically, 8 in differing ways expressed themselves in favour of the recommendation by the COI that the case of DPRK should be referred by the Security Council to the International Criminal Court (ICC) in The Hague. Under the Rome Statute, where a country concerned is not a party to the treaty, exceptionally, the Security Council may confer jurisdiction on the ICC. It has done this twice – in the cases of Darfur and Libya.

At the Arria briefing, 2 seats were empty. They were those of China and the Russian Federation: permanent members of the Security Council whose affirmative vote is required to produce a valid substantive resolution of the Council, in accordance with art 27.3 of the UN Charter.

An important question is therefore presented in crude terms. What would now happen if the 2 permanent members withheld their concurring votes in any resolution presented to the Security Council, whether along the lines recommended by the COI, or otherwise?

In recent years, the United Nations has given much emphasis to the central importance of universal human rights as one of the core principles of the organisation, expressed in the Preamble to the Charter. It has moved towards a 'rights up front' approach in the conduct of its secretariat, and of its constituent organs. It has laid emphasis upon accountability for international crimes – including genocide and crimes against humanity. Moreover, at the 2005 World Summit of the UN General Assembly, the organisation unanimously adopted a commitment to the responsibility to protect (R2P). As Australia's former Foreign Minister, Gareth Evans, explained in his book The Responsibility to Protect – Ending Mass Atrocity Crimes Once and For All (Brookings, Washington, 2008), many misunderstandings persist about the scope and limits of R2P. Much remains to be done to solidify political support and build up institutional capacity. However, where seriously arguable case of grave crimes against humanity exist, and where the due organs of the United Nations have formally reported on them and recommended a course of action to respond, a serious moment of truth is reached in the international political and institutional machinery. Is the talk about R2P merely rhetoric? Is it premature to consider that the world has at last put in place the machinery to respond to risks of further holocausts? Are we finally capable, as a global community, to deliver effective remedies against crimes that shock the conscious of humanity? The vivid symbols of the 2 empty seats at the Arria meeting of members of the Security Council is cited by some commentators as proof positive that recommendations for action by the COI on North Korea will not be achieved. "I am far from convinced that this is the case," the Hon. Michael Kirby AC CMG says, listing a number of factors:

The comparative speed and unanimity with which, in July 2014, the Security Council reached consensus on a resolution rising out of the downing of Malaysian Airways flight MH17, suggests that, where there is a will, even acute geopolitical interests can give way to agreement and international action. Especially so, where, international media, and broad unanimity in the United Nations demand such action. A resolution of the Security Council, even one submitting DPRK to the ICC is not a full response to the R2P. But it sure is a big step in the right direction.

The case of North Korea is starkly painted in the report of the COI. The witnesses around whom the case is constructed commonly gave their testimony in public, and it is available online. This COI was transparent in its procedures, its recommendations, including invocation of the ICC, constitute an implementation of the R2P.

In October, November and December 2014, we can expect issues of North Korea to be debated in the General Assembly and, hopefully, the Security Council. Those who would impede the near unanimous demand for action to uphold universal human rights will be watching closely the response of the UN. This is one occasion where the UN machinery has acted swiftly, efficiently, and with a compelling report. Now it is for politicians and diplomats to convert into action. History will judge severely (as will the watching people of the world) the actions of those who would impede an effective response. Building blocks of R2P are there. But will the players grasp them, and ensure that human rights come at last to the people of DPRK?

The Hon. Michael Kirby (Australia) is former Justice of the High Court of Australia (1996-2009); President of the International Commission of Jurists (1995-8); and UN Special Representative for Human Rights in Cambodia (1993-6). In this article, drawing upon a talk he gave to the Hague Institute for Global Justice on March 20, 2014, he describes the work of the UN Commission of Inquiry on Human Rights in DPRK: A/HRC/25/63 (7 February 2014).