Top 5 facts you need to know about ASIC civil litigation

Over the last 10 years, the ASIC regulatory landscape has changed a great deal — legislative developments, funding changes, royal commissions, the political spotlight — but how does this landscape translate into real life experience in the courts? Lifting the lid on civil litigation involving ASIC — does a deeper analysis of enforcement judgments in this space reveal any surprises?

And the winner over the last 10 years is…

Over the last decade there have been more ASIC enforcement judgments in the Federal Court revolving around misleading or deceptive conduct in relation to financial products or financial services (Corps Act s 1041H) than any other alleged type of contravention. 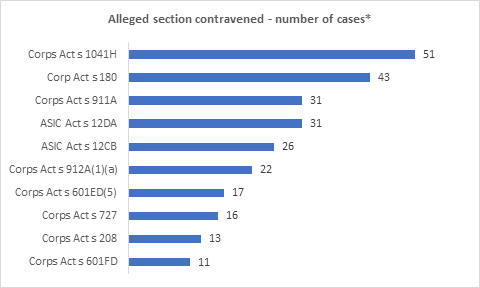 Second on the list - breaches by directors and other officers in exercising care and diligence in their duties (Corps Act s 180).

And coming in third - the need for an Australian Financial Services licence - litigation targeting financial services businesses that are operating without a licence (Corps Act s 911A).

The top 5 list contains a heavy weighting towards contraventions in the financial services industry and the offering of financial products. This general theme is extended when looking at the next tier of targeted provisions – including a specific focus on managed investment schemes:

ASIC has made temporary changes to its priorities in order to adapt to the impact of COVID-191. Although it seems unlikely that this will impact heavily on the types of sections being targeted in the top 10 list, it will be interesting to monitor any impacts on ASIC litigation patterns in the coming years.

Overall, ASIC have been successful, or partly successful, in 88% of civil litigation enforcement actions it undertakes in the Federal Court (including the full court) and the High Court*. 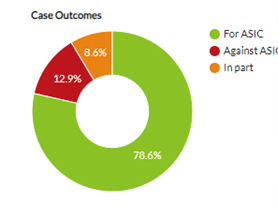 ASIC success rates* vary depending upon what section has been allegedly contravened, but of the top 10 sections most frequently targeted, the rates are high across the board – ranging from a “low” of 67% (Corps Act s 601FD; Corps Act s 208) to a high of 100% (Corps Act s 601ED(5)). 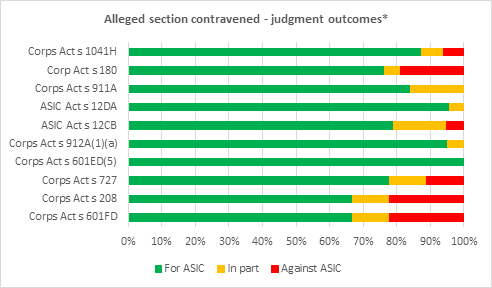 It should be noted that although statistically speaking defending an ASIC action is an uphill battle, it would be remiss in discussions to not mention exceptions. A relatively recent example - Westpac had come to the table with the acceptance of a $35 million fine in relation to alleged responsible lending breaches. Put forward to the court for 'rubber stamping', the proposed penalty agreed between the parties was rejected and the action ultimately dismissed2. So, twists and turns are always possible. But looking purely at the data, in terms of risk mitigation it would be fair to say a sounder strategy is to put in place strong compliance systems and avoid the courts in the first instance.

Legislative guidance on penalties is obviously of central importance – but real-life analytics assist to complete the picture. An analysis of Federal Court orders (enforcement) reveals the types and range of penalties handed down - information to provide better data-driven advice to clients or boards. 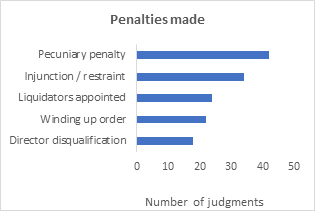 It is not surprising that in the last 10 years the most common penalty handed down in Federal Court orders in relation to ASIC-led enforcement litigation was a pecuniary penalty. The record for the highest penalty imposed on a corporation currently stands at $49,500,0003, with the highest penalty for an individual at $3,000,0004.

Injunctions (excluding interim injunctions) were the second most common order made – ranging in duration from 7 months to permanent.

Winding up / liquidators appointed orders were made in around 24 judgments. 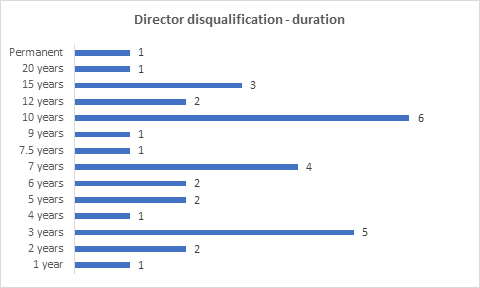 And what if we apply a gender lens on these disqualifications? (to put some context around this stat… the Australian Institute of Company Directors have recorded current female Board representation on ASX 200 companies at 31% https://aicd.companydirectors.com.au/advocacy/board-diversity) 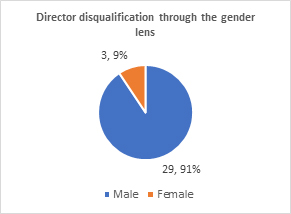 Since 2010, the majority of ASIC civil litigation has been undertaken in the Federal Court. 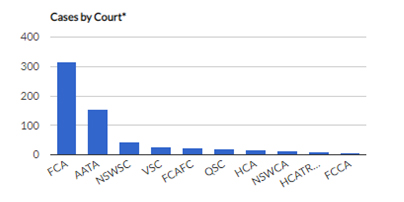 And the busiest Federal Court registry? The honour goes to Victoria, managing to trump New South Wales. This bucks the trend for litigation that we see elsewhere. 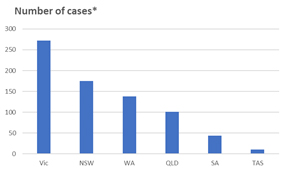 Other trends of note – the increase in review activity in the Administrative Appeals tribunal and the decline in the volume of judgments involving ASIC as a party in the Supreme Courts.

When looking at the types of words and phrases that have been judicially considered in ASIC cases, two words in particular jump out in terms of volume: “managed investment scheme” and “financial product”

This further reinforces the most targeted sections list (Ref. section 1) and reflects the weighting of litigation towards the financial services industry and financial product offerings.


And the most frequently cited cases in ASIC judgments? 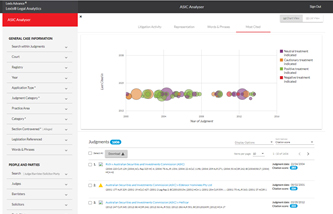 A High Court case stemming from one of the biggest civil cases in the history of the NSW Supreme Court, with ASIC alleging that the executive directors of One.Tel telecommunications company had failed to meet their duties in the months leading up to the company's collapse in May 2001.

[32] Secondly, and more fundamentally, the supposed distinction between "punitive" and "protective" proceedings or orders suffers the same difficulties as attempting to classify all proceedings as either civil or criminal36.. At best, the distinction between "punitive" and "protective" is elusive. That point is readily illustrated when it is recalled that, as McColl JA pointed out37., account must be taken in sentencing a criminal offender of the need to protect society, deter both the offender and others, to exact retribution and to promote reform38.

A matter around takeovers that involved the testing of ASIC powers from a constitutional perspective. 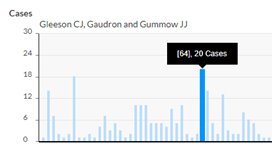 [64] "Jurisdiction" and "power" are not discrete concepts. The term "inherent jurisdiction" may be used, for example in relation to the granting of stays for abuse of process, to describe what in truth is the power of a court to make orders of a particular description70. In Harris v Caladine, Toohey J said71: "The distinction between jurisdiction and power is often blurred, particularly in the context of 'inherent jurisdiction'. But the distinction may at times be important. Jurisdiction is the authority which a court has to decide the range of matters that can be litigated before it; in the exercise of that jurisdiction a court has powers expressly or impliedly conferred by the legislation governing the court and 'such powers as are incidental and necessary to the exercise of the jurisdiction or the powers so conferred'72."

Arising from the James Hardie corporate scandal – and one of the longest running litigation matters in Australian history. A case dealing with the directors of the company and whether announcements to the market were misleading in relation to compensation funds.

[165] Disputed questions of fact must be decided by a court according to the evidence that the parties adduce, not according to some speculation about what other evidence might possibly have been led. Principles governing the onus and standard of proof must faithfully be applied. And there are cases where demonstration that other evidence could have been, but was not, called may properly be taken to account in determining whether a party has proved its case to the requisite standard. But both the circumstances in which that may be done and the way in which the absence of evidence may be taken to account are confined by known and accepted principles which do not permit the course taken by the Court of Appeal of discounting the cogency of the evidence tendered by ASIC.

So, in summary, what does the data suggest…

Top tips - ensure you have strong compliance programs in place; tread very carefully – especially in financial services; if challenging ASIC, be aware that historical success rates are not on your side (unless you are ASIC); prepare well – and potentially prepare to pay… 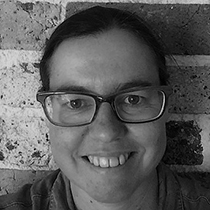 Julie has over 20 years’ experience in the legal content and technology industry. She has worked extensively with local and international teams, including Australia, New Zealand, India, USA, China and the UK. Julie’s current role focuses on applying the latest analytic technologies to a range of legal information to make information more accessible and gain new insights. Julie looks at product design from an end-to-end perspective, from content architecture through to front-end design to support a holistic user experience. 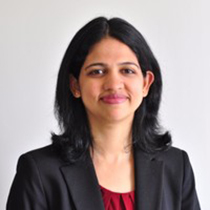 Seeta Bodke is a Product Manager in the Legal Analytics team with LexisNexis. She has been focused on developing the Lexis® Legal Analytics suite of products; identifying customer needs and staying abreast on the evolving legal IT landscape. Her experience includes working across global teams from Australia, USA, UK and India, building products in the information publishing and legal domain space and working with Engineering to develop and implement the technology.