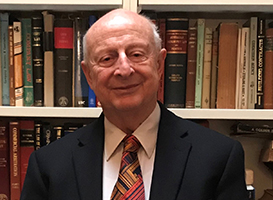 Born in Shanghai, China in 1941 and migrated to Australia with family in 1951.Admitted to practice in 1963 and to the Victorian Bar in 1964. General experience in many fields. Appointed as Queen's Counsel in 1988.Transferred to non-practising list of the Victorian Bar on 1 July 2015.

In 2013 and 2014 he represented a mining company in an administrative law case which was heard in the High Court and the Court of Appeal in the Solomon Islands.

Nathan Moshinsky has presented at numerous events over the years and has a list of engagements to his name spanning across all the areas of his expertise. In particular, he has presented talks concerning the Solomon Islands, the work of the Regional Assistance Mission to the Solomon Islands and some of the cases he was involved in, during his period as Solicitor-General in that country.